-- Parker: An absolutely spectacular effort, the 2009 is one of the all-time great La Gaffelieres produced. One would have to go back to the 2005, 1947 or 1961 to find this level of quality from this ancient, historic vineyard planted adjacent to the walls of St.-Emilion, on the Cote Pavie. Dating back to the 1400s, this estate has been owned for over three centuries by the Malet-Roquefort family. Composed of 80% Merlot and 20% Cabernet Sauvignon (in the past it was two-thirds Merlot and the rest split between Cabernet Sauvignon and Cabernet Franc), the 2009 reveals compelling elegance, tremendous intensity and opulence and more viscosity than one normally sees. While I thought the alcohol was well past 14%, the Chateau claims it is only 13.5%, which is relatively modest in this vintage. Lots of kirsch, licorice, incense, truffle, asphalt, blackberry and cassis notes dominate the aromatics and flavors of this full-bodied, viscous, fabulously pure, flamboyant St.-Emilion. Drinking it now may be considered infanticide by some consumers, but it is already attractive, and should last for 3-4 decades. Kudos to consultant Michel Rolland for fashioning one of the all-time greats from La Gaffeliere. 95+/100

-- Wine Spectator: Racy and beautiful, with blueberry and blackberry aromas and flavors. Solid core of everything. Impressive. 92-95/100

-- Wine Enthusiast: Soft, almost too smooth, the sweet plum fruits way underneath layers of velvet and plush. The structure is hard to find here, but the richness of the year is very apparent. 93-95/100 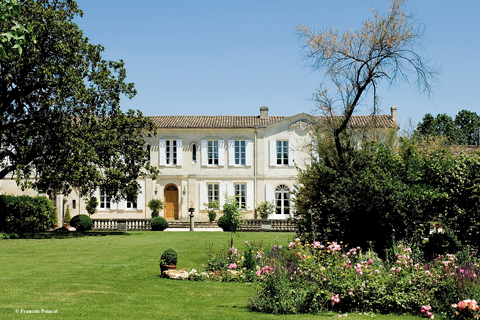